What a Load of Rubbish by Martin R. Etheridge 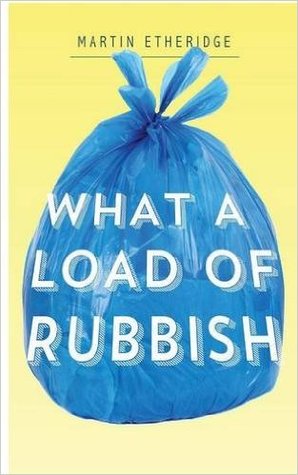 Book Blurb (from Goodreads):
Malcolm Tilsley is a street cleaner. He is well educated and smart and clean. And being a street cleaner is all he ever wanted to be. Street cleaning is a family tradition, it's in his blood, and he wants to be the best there has been. Willy Eckerslike, Managing Director of Suburbiaville Newtown council has different ideas and wants to replace Malcolm with a fantastic vehicle called the "All-in-One-Der". Manned by Rubbish Robots, the mobile wheelie-bins equipped with mechanical arms and different attachments are faster, more efficient and cheaper than humans. It makes Malcolm redundant. What A Load of Rubbish is a brilliant mix of social theory, human spirit and classical heroism that culminates in a battle between man and machine.

This was a short and entertaining book to read.
What a Load of Rubbish follows the story of Malcolm Tilsley, who was a street cleaner since 20 years. However, the Council created a machine, that would clean faster and more efficiently than Malcolm. He then starts sulking and becomes seriously sick. Afterwards, he challenges this new cleaning vehicle to a contest: man versus machine.
I found this book interesting and it was also a fast read, for it was shorter than the books I normally read. It was captivating to read and the atmosphere was very light and humourous. I really liked the conversational tone the writer used to tell the story, which makes you want to keep on reading and is captivating. However, I thought that the events were too coincidental. Something has to lead to these events, they can't just happen.
The characters were very stereotypical. Malcolm was way too nice and was trying too hard to do his job. Gisele was an alright character, even though she was over-the-top most of the times. There were a lot of other minor characters, who played a role in the story; however, they didn't really have an unique personality. As an example, Willy Echerslike was the normal stereotypical bad and mean boss. He tried to be the top and doesn't care about other people. The characters aren't complex and weren't very interesting. What eventually became a big let-down for me was that the different accents and dialects were definitely overdone. Especially Gisele's German accent, because the author wrote the English words as they sound with a German accent. The same was for the different English dialects.
Overall, the book was fun to read even though it wasn't very exciting. It was a light read; however, I thought that the events cannot just happen without anything leading up to it. The characters and their accents were stereotypical. The accents kind of made them difficult to understand in some cases, so I was confused about what they are saying.
Finally, I give this book 3 out of 5 stars.