Magic to Memphis: What if your life is working from the inside out? by Julie Starr 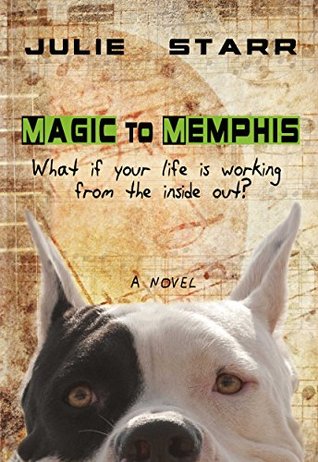 Book Blurb (from Goodreads):
Music, murder and everyday magic.
Jessie is seventeen years old, a runaway musician living rough in a trailer with a pit bull dog called Bear. That’s fine by Jessie; she’s got big plans. A music contest in Memphis offers the chance of money, fame and escape from a nowhere town with no real prospects.
Turns out there’s more in Memphis than music. When Jessie’s mom sends her a box of things belonging to her dad, she finds out that he made the same trip years ago. She’s determined to find him, but has no idea that the ring her dad left her is being hunted by a sadistic killer. Nor does she realize that he will stop at nothing to get it back.
Suddenly, a simple music contest turns into a fight for survival and only a puzzling traveler called Finch has the answers Jessie needs. But will she listen? And can she trust in herself enough to change her luck and make magic happen?

This was a really captivating and unique book.
I absolutely enjoyed this book. It had just the right mix of contemporary, mystery and magic. What I really liked, was that the magic wasn't the typical elemental magic; it was a light, everyday magic. This book revolved around a seventeen year old girl called Jessie, who ran away from home to search for her father who went to Memphis to become a big musician. On the way, Jessie became part of a rogue band in Dorma and her goal is to go to Memphis and find out more about her father, because he never returned to his family.
I was pleasantly surprised when I read this book, because it was definitely not what I was expecting. The writing captivated me from the very beginning; however, I was very confused at the start about what was happening. Then I really loved how the story progressed from then on. The slight mix of magic in this otherwise contemporary book was really well done. I also liked the plot and the action. Close to the end was an emotional part and really well written. Another part that could be worked on, was the perspective switches. They seemed a bit abrupt and so was the transition from Jessie's dreams back to the waking world, because the dreams seemed random at first and I had no idea what was going on.
The characters were well-rounded and had their own unique personalities. My favourite characters by far are Finch and Bear. Bear was just so adorable and the way he always follows Jessie around and tries to protect her is really cute.Finch was a very interesting character. He is a journalist and wrote an article in the newspaper about everyday magic. He always seems so calm, innocent and wise at the same time, which is a strange mix that works out for him.
Overall, I loved how the story worked out, especially the closer I got to the end. I was captivated from the start and always wanted to keep on reading.
Finally, I give this book 4 out of 5 stars!