Grim Tuesday (The Keys to the Kingdom #2) by Garth Nix 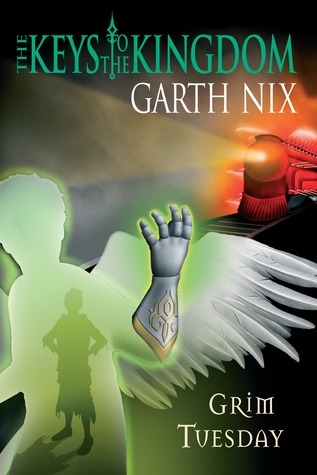 Book Blurb (from Goodreads):
Arthur doesn't think he will ever have to return to the strange house that nearly killed him on Monday -- the house that contains an entire world. But Tuesday brings new challenges -- in the form of an enemy named Grim Tuesday, who threatens the well-being of both Arthur's family and his world. Arthur must retrieve the Second Key from Grim Tuesday in order to save everything -- an adventure that will include stealing a Sunship, surviving a very weird work camp, befriending a bearlike spirit, fighting the voidlike Nithlings, and traveling to the scary Far Reaches for the ultimate showdown.


My Review
An amazing sequel to the first book.
I thoroughly enjoyed reading this book, I absolutely loved it. The plot of this book is, that Arthur has returned home and it is Tuesday on Earth. Then he gets a phone call from the Will, saying that the Trustee, Grim Tuesday, is working against them. Apparently he found a loophole in the agreement made with the rest of the Morrow Days and is now laying claim on the Lower House. He wants to force Arthur to hand over the Lower House and the First Key by putting Arthur's world into a terrible financial crisis.
I think that the plot was thought out very carefully. The solutions to the problems or dangers in the book were always logical and weren't based entirely on luck as some books I know. I also liked that not everything went well in this book. There were some major problems and not everything went as expected. I liked finding out and exploring the new demesne of the House and meeting new interesting characters. I think that part of the fun is to find out how the new Part of the Will looks like, seeing how annoying and uncooperative it can be and also how the next Key looks like. I enjoyed reading the whole book (I read it in a day) except that I think that the part when Arthur was going to the Pit was a bit dragged out too much. Besides that, the pacing was very good and not too rushed. I just found that the plot of the book was a bit too repeated from the previous book.
I really liked all of the characters, except for the Will and Dame Primus. I will talk about them first. I didn't mind Dame Primus when she was a frog in the first book, but in this book, both she and the Second piece of the Will were really starting to get on my nerves. The Second Part of the Will was especially annoying because it was almost as sleepy and careless as Mister Monday! Is that even possible!? Anyway, Arthur was still a very likable character. He is smart and brave and really does care a lot for his family. Somehow, he always finds a solution to every problem, but as mentioned, the solutions were logical. Suzy was a really fun character though. She doesn't have a care in the world and she always appears at the right place, on the right time. She always says what she is thinking and is a daredevil kind of person. I wished that some of the old characters would have appeared in this book as well or gotten more lines.
The writing style especially made this book really enjoyable. Everything is written in an excitable way and I never got bored reading it. It is so good!
This book was amazing but I cannot give it a full rating because the plot is repeated. I give it 4 out of 5 stars!