The Mark of the Dragonfly by Jaleigh Johnson 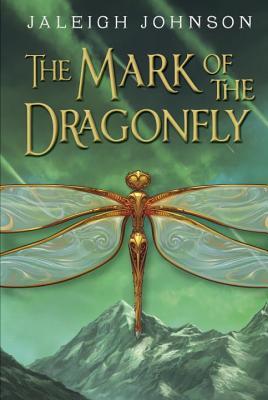 Book Blurb (from Goodreads):
Piper has never seen the Mark of the Dragonfly until she finds the girl amid the wreckage of a caravan in the Meteor Fields. The girl doesn't remember a thing about her life, but the intricate tattoo on her arm is proof that she's from the Dragonfly Territories and that she's protected by the king. Which means a reward for Piper if she can get the girl home. The one sure way to the Territories is the 401, a great old beauty of a train. But a ticket costs more coin than Piper could make in a year. And stowing away is a difficult prospect--everyone knows that getting past the peculiar green-eyed boy who stands guard is nearly impossible. Life for Piper just turned dangerous. A little bit magical. And very exciting, if she can manage to survive the journey.


My Review
I saw this book in the library and when I saw the cover I was thinking "Woah, I think I'm going to love this book!" Well, I wasn't tat far off. I found that this book was an enjoyable read with lovable characters and amusing conversations.

I found though that the book, at the beginning, was written slightly childish and less mature than what I would normally read. Then my friend found the problem: it is actually supposed to be for 11-12 year olds. When I heard, I was like "OK, that explains some things."
As I mentioned, the book was written slightly childish, because there was a lot of joking around but sometime the conversations were pretty amusing.
Anna was an interesting character. All the time she spew scientific knowledge and if you didn't know what she talked about, then you would be really confused. But for some reason she was a really likable character and you can really feel the connection between Piper and Anna as "sisters". Gee was a different case. It was a bit strange, because his moods kept on changing but in the end you do end up liking him.
The plot itself was a bit predictable and the ending was a bit too good to be true but since this is a standalone, I am not complaining.
I think that this book was pretty good and I literally tore through it in a couple of days and that's why I can give it 4 out of 5 stars!