The Lost Hero (Heroes of Olympus #1) by Rick Riordan 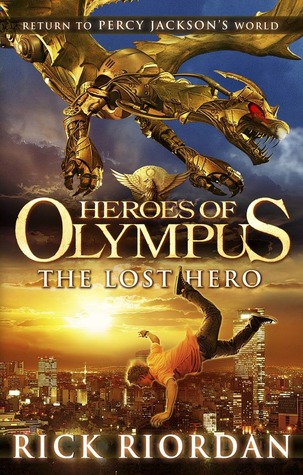 Book Blurb (from Goodreads):
Jason has a problem. He doesn’t remember anything before waking up on a school bus holding hands with a girl. Apparently he has a girlfriend named Piper. His best friend is a kid named Leo, and they’re all students in the Wilderness School, a boarding school for “bad kids”, as Leo puts it. What he did to end up here, Jason has no idea — except that everything seems very wrong.

Piper has a secret. Her father, a famous actor, has been missing for three days, and her vivid nightmares reveal that he’s in terrible danger. Now her boyfriend doesn’t recognize her, and when a freak storm and strange creatures attack during a school field trip, she, Jason, and Leo are whisked away to someplace called Camp Half-Blood. What is going on?

Leo has a way with tools. His new cabin at Camp Half-Blood is filled with them. Seriously, the place beats Wilderness School hands down, with its weapons training, monsters, and fine-looking girls. What’s troubling is the curse everyone keeps talking about, and that a camper’s gone missing. Weirdest of all, his bunkmates insist they are all—including Leo—related to a god.

My Review
I was actually putting off reading this book because I think I got a little to attached to Percy Jackson and didn't want to move on to new heroes, even though Percy will be here in the series. But I must admit that the new heroes were pretty cool. The plot was pretty good but ll the while when the basic world of gods and myth was being reintroduced to the heroes, I felt that too many things were suddenly added because this book is taking place just one, two months after the previous book. I mean, that suddenly you find out that Camp Half-Blood always had a mental, bronze dragon? When did that happen? My point is that a lot has changed and it took me some time to get used to that. This also influenced my final rating.
This book was written in third person, out of the perspective of our three new heroes: Jason (the odd one out), Piper (secretive girlfriend) and Leo (the joker and weird fire dude). I didn't really like Leo's perspective that much even though he was constantly making bad jokes and had a funny description, but his story wasn't really as interesting as Jason's and Piper's because they are keeping secrets. And (YAY!) the old characters we know and love like Annabeth are also mentioned. Besides that, a lot of other new gods were introduced, new friends and everything.
It also happened, that you get a bit too attached to creatures and when they die... yeah...
Overall though, I made some points above about the book that I didn't really like but I still loved it and give it 4 out of 5 stars!