The 5th Wave (The Fifth Wave #1) by Rick Yancey 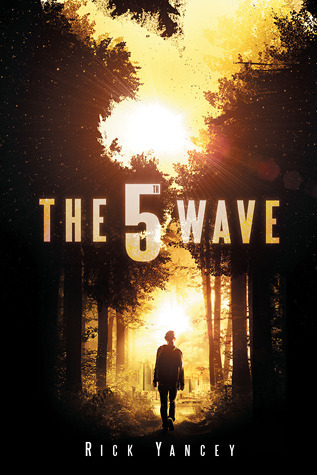 Book Blurb (from Goodreads):
The 1st Wave took out half a million people.

The 2nd Wave put that number to shame.

In the 4th Wave, you can't trust that people are still people.

And the 5th Wave? No one knows. But it's coming.

On a lonely stretch of highway, Cassie runs. Runs from the beings that only look human, who have scattered Earth's last survivors.

To stay alone is to stay alive, until she meets Evan Walker. Beguiling and mysterious, Evan may be her only hope.

Now Cassie must choose: between trust and despair, between defiance and surrender, between life and death.

My Review
Let's start by explaining what Jessie and I agreed on, one day. We noticed that we don't have a lot of books in common. So we recommended books to each other and then we had to choose on of the recommendations and we had to read that chosen book. So, I chose "The 5th Wave".
Basically, this book is about aliens invading and destroying the Earth and killing the humans. Their attacks were called "waves". The book is told out of many different perspectives, like Cassie's, Zombie's, Sammy's and the Silencer's.
I love Cassie's perspective. She is so sassy and her commentary is hilarious. One of her funny lines in the book was Oh there's an alien apocalypse, quick grab the beer! That was really funny.
Evan Walker was a slightly irritating character. He was so timid it was so frustrating and weird and then he started going all killer-style and then he becomes a really cool character.
The plot of the book was generally really good. On my newly invented machine, the Excite-ometre, out of a scale 1 out of 10, 10 being "Omg, I can't take it anymore!" I would give this book 5 or 6 because there was action but not necessary a lot. But I liked the idea of aliens taking over and the book was pretty original.
Overall, with the hilarious commentary and the plot, I can give this book 4 out of 5 stars!