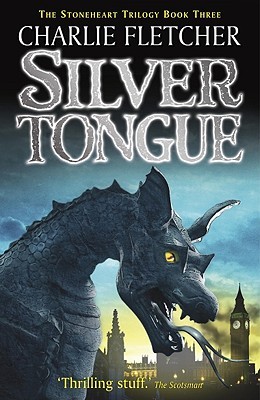 Book Blurb (from Goodreads):
George and Edie are travelling through unLondon, a world of danger on the city streets, and they are quite alone.

Time is standing still, and the rest of London is unaware of their plight, unaware of the hidden world of living statues, of Shackleton and the Queen of Time.

In the concluding part of the breathtaking and critically acclaimed Stoneheart trilogy, Edie and George look deeper into Edie's past, and her future.


My Review
Overall, I really enjoyed reading this series. Sadly, I didn't get to enjoy this book as much, mostly because I was annoyed at one of the characters, but more about that later on. I think that this book has had some sense of humour, not a lot, but there was some. As I mentioned in the earlier reviews, I think that the idea was original and I found it amazing that Charlie Fletcher managed to give statues from our everyday lives a likable personality. In this book you also realize how much you like a character until they are fatally injured and you have no idea if they are going to survive or not. Charlie Fletcher also introduced a lot of new characters, with which you don't really bond with because you don't know their personality yet. My current favourite character list for this book now expanded to three characters: Spout, the gargoyle, the Gunner and Richard the Lionheart. The last one is new, but he is such a cool character.
There were some sad moments in this book, but not to sad although, when a character dies, any character at all, I always reread that section a million times, like, "Did that really happen?"
During the whole book,  there were (not so) shocking betrayals and shifting alliances. My only complaint was that I was so very, very annoyed at Edie. She got all of the Gunner's and Queen's attention and I felt that George was being neglected. She always gets hurt and then the others get concerned about her. All of them say that Edie is special and seemed to ignore George. Also at the end of the book, the author made it seem as if everything is alright, but there were still a lot of questions unanswered.
That's why I can only give this book 4 out of 5 stars!