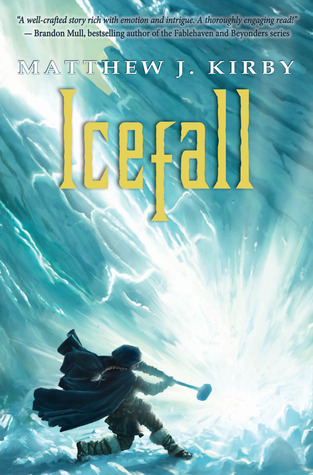 Book Blurb (from Goodreads):
Trapped in a hidden fortress tucked between towering mountains and a frozen sea, Solveig, along with her brother the crown prince, their older sister, and an army of restless warriors, anxiously awaits news of her father's victory at battle. But as winter stretches on, and the unending ice refuses to break, terrible acts of treachery soon make it clear that a traitor lurks in their midst. A malevolent air begins to seep through the fortress walls, and a smothering claustrophobia slowly turns these prisoners of winter against one another.
Those charged with protecting the king's children are all suspect, and the siblings must choose their allies wisely. But who can be trusted so far from their father's watchful eye? Can Solveig and her siblings survive the long winter months and expose the traitor before he succeeds in destroying a kingdom?


My Review
A really quick and refreshing read.
At first I was a bit skeptical about reading this book. First off, it didn't seem to mention any magic and it didn't sound very action-packed. But BOY am I glad that I read this book.
This is actually categorized as a kind of children's fantasy book, which is based off the Vikings (I think) and also talks a bit about Norse mythology. It revolves around the young princess Solveig, her beautiful older sister and her younger brother, the heir to the throne. Her father, the King is currently at war and shipped his children along with some other people to a hidden fortress beneath a glacier. But soon, some traitorous deeds have been uncovered and Solveig can't trust anyone anymore.
This book was absolutely beautiful. Everything: the writing, the characters, the plot and the concept were gorgeous.This book focuses more on the truth of life and story-telling and sometimes it was just so sad and you realize how true it is. The plot and the action took a bit longer to start. The introduction lasted longer than I would have expected. One of my favourite aspects of the book are that for the first half, before every chapter there would be one to two pages told in Solveig's perspective about her life at home until the present with the traitor still unknown. She would tell stories about her past, bring up memories and it becomes really sad when she mentions that when she would look upon the traitor's face, she would be disappointed because she thought she knew them and that she would still love them.
Solveig was such a lovely girl. Her backstory is really sad, in the memories we find out that she was always overlooked and disregarded by her own father because she was nothing to him. But in truth, Solveig is an innocent, sweet and intelligent girl. She knows how to tell stories and reach the hearts of her listeners if she just believed in herself. The animal characters in this book were the best. They were so 3D and very adorable! Hilda the goat and Muninn the raven were amazing. Muninn actually had a real personality while still behaving like a raven.
The writing was awesome, beautiful and the emotions were conveyed with surprising clarity. Add that and the fact that I adore anything to do with mythology and this became the perfect mix. This book actually tells you stories about Norse mythology which was very interesting.
Overall, I was sooo happy I decided to read this book. It didn't seem like the kind of book I would normally read and the plot was slow at the beginning, but the rest of the book was pure awesome. I really recommend this quick read to anyone who wants a quick, refreshing break from the usual books. I give this book 4 out of 5 stars!