The House of Hades (Heroes of Olympus #4) by Rick Riordan 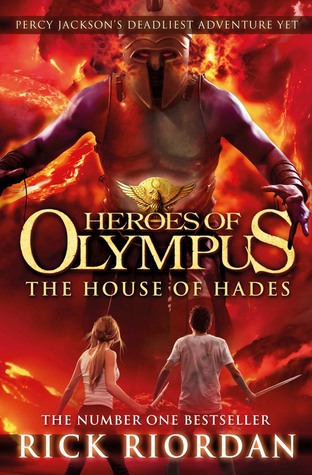 Book Blurb (from Goodreads):
At the conclusion of The Mark of Athena, Annabeth and Percy tumble into a pit leading straight to the Underworld. The other five demigods have to put aside their grief and follow Percy's instructions to find the mortal side of the Doors of Death. If they can fight their way through Gaea's forces, and Percy and Annabeth can survive the House of Hades, then the Seven will be able to seal the Doors from both sides and prevent the giants from raising Gaea. But, Leo wonders, if the Doors are sealed, how will Percy and Annabeth be able to escape? They have no choice. If the demigods don't succeed, Gaea's armies will never die. They have no time. In about a month, the Romans will march on Camp Half-Blood. The stakes are higher than ever in this adventure that dives into the depths of Tartarus.

My Review
This book just about sums up epic. It continues right where it left off, when Percy and Annabeth just happened to be incredibly unlucky in the last book (again, that was a huge cliffhanger). I imagined Rick Riordan sitting there at his desk, smiling creepily while watching the readers suffer, reading that cliffhanger. I thought: "Authors are cruel. They create cliffhangers just to see us suffer. They live off our pain." I was absolutely convinced about that when I read the dedication. It was for the readers and Rick Riordan says he apologizes, not really. Evil laugh. BEST DEDICATION EVER!!!!!
This time, the story is about closing the Doors of Death (which is nearly impossible, but that's why these crazy demigods are doing it in the first place) and saving Percy and Annabeth. There were some major character developments in this book, as an example Hazel and Frank. I really liked Frank in this book. Before the character development came, that was mostly due to the hilarious arguments of Ares and Mars in Frank's head. After Frank became ore confident and more of a leader, I liked him because of his personality. Hazel also was important for the quest, which I found pretty cool because she is an interesting character. Otherwise the story is also told out of Annabeth's, Percy's, Leo's, Jason's and once out of Piper's perspective.
I loved everything about this book (yes, also the writing style) and near the end I was thinking that so much still had to happen and that there were too little pages. And then I think "Calm down, there is another book, just relax."
I loved this book and give it 5 out of 5 stars!