Sir Thursday (The Keys to the Kingdom #4) by Garth Nix 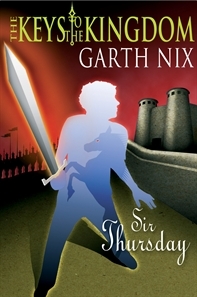 Book Blurb (from Goodreads):
Following their adventures in the Border Sea, Arthur and Leaf head for home. But only Leaf gets through the Front Door. Arthur is blocked because someone or something has assumed his identity and is taking over his life.
Before Arthur can take action, he is drafted by Sir Thursday and forced to join the Glorious Army of the Architect. The Army has its headquarters in the Great Maze, a defensive area of the House. Half of the Maze has already been dissolved by Nothing, and hordes of Nithlings emerge regularly to attack the rest. If the Nithling invasion can overcome the Army and the Great Maze, the House will be lost and the whole universe destroyed.
While Leaf tries to banish Arthur's doppelganger on Earth, Arthur must survive his basic training, avoid getting posted to the Front and work out how he can free Part Four of the Will and gain the Fourth Key from Sir Thursday.

My Review
Oh my god, I need the next book!
After having survived the Border Sea, Arthur is called back to Monday's Dayroom by Dame Primus to receive some grave news. While drinking his orange juice though, he almost chokes on a penny made by Sir Thursday, indicating that Arthur has been drafted into the Glorious Army of the Architect. Over in the Great Maze, Arthur has to survive the training.
Ever since the last book, the plot has been different from the first two books. A lot of new characters were introduced and Arthur also made a new friend and had several near-death experiences. I know I have said it before, but I mean it when I say that you never get bored when you read this book. I have otherwise said everything I thought about these books in my previous reviews, this book never dragged in any part and there was almost always some new information. This time, the story is told out of Arthur's and Leaf's perspective.
As I said before, a lot of new characters were introduced in this book. We meet Sir Thursday, his Times and also Fred Gold. Since Arthur doesn't wants to be discovered, he had to have a false identity with the name Ray Green. I found that Sir Thursday was a very interesting character and his rages were sometimes a bit funny. I liked his Times as well. Noon and Dusk were interesting characters as well because there is just something about them that makes me like them. I also realized, that I really, really hate Dame Primus. Like really. The separate parts of the Will were alright, but when they merge with Dame Primus... ugh. She is just unbearable. Everytime she has a showdown with Arthur, I am always happy every time she loses. :)
I really look forward to reading the next book and give this book 5 out of 5 stars!