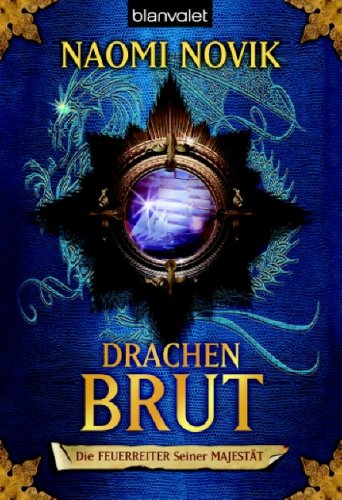 My Review
If you haven't guessed yet, I like fantasy. And that means I love dragons. Yes, I picked the book up because it has dragons in it. Deal with it. :)
OK, so let's get started. This book is taking place during the Napoleonic War. Will Laurence is the captain of the British ship Reliant. They captured a French ship in battle called, Amite, and while he and his crew searched through the storage area, they found a dragon egg. When the dragon hatched, Laurence called him Temeraire and the young dragon picked Laurence as his rider. Now Laurence has to join the air force. And find out what breed of dragon Temeraire is. Together they also have to try to complete the training.
Now, I must say that the plot of this book was certainly very interesting but there wasn't any back-stabbing or anything like that so it wasn't a very deep book, but that's alright. I was very interested in trying to find out what breed Temeraire is and believe me, there were a lot of different breeds of dragons. I also really liked reading about how Temeraire was growing up, since dragons grow up quicker than humans. This book is pretty much following Temeraire's life from a baby to a young dragon. There was also a lot of action involved in this book, involving battles, serious problems and also several deaths and near-death experiences. I was really into reading this book except for the beginning because it took me a while to start liking the book. I also realized that there were a lot of names in this book which I had to remember because then  a lot of them were mentioned later on in the book and I had to quickly remember who the characters were talking about but after a while you just know who they are. At the end, the book also contained a few informational pages about different dragon breeds by Edward Howe. There were also several sketches of how the main dragon breeds looked like.
I will talk about the characters now. Overall, I think that Levitas and Temeraire were my favourite characters. My favourite parts in the book was reading about Temeraire and Levitas. Yes, I am obsessed with dragons. Temeraire was a very intelligent dragon and very loyal to Laurence. He cares deeply about his friends and is ready to fight anyone who is threatening them and Laurence. Even without anyone threatening anyone, Temeraire seems a bit too eager for a fight. And he also loves books and is obviously a math genius. Laurence was also a interesting character. He was raised as a gentleman and therefore has very good manners. He is very kind and always follows his heart. I think that he was a very likable character.
The writing style was also very enjoyable. There were descriptions of the surroundings, but not too elaborated. Naomi Novik focused more on the action. Although there were a lot of battle words which I didn't understand, but you learned to understand them out of context or just guess.
I really loved how the author managed to blend real history with dragons so perfectly without any clashes which I found amazing since I also happen to be interested in history. I give this book 4 out of 5 stars!