Alright kids, lets roast some s'mores and sit around a campfire, IT'S STORY TIME.

Jessie's POV
A long time ago (five weeks) in a galaxy far, far away (our local bookstore) we met Sarah J. Maas. It wasn't certain that we were going to be able to meet her since we were both in the middle of our work experience but we managed to carve out some time and leave work early to meet her. She also came to our school, but that was something that we definitely couldn't attend which was annoying, we were told that she gave a great presentation.
The bookstore was completely crowded and we weren't even sure if we would get a front row spot since people were already arriving two hours early, it was kind of impressive. Some of the topics which she covered were ACOTAR and she also answered some fan written question about the characters which got pretty funs. We would of loved to video tape it to show you guys but we weren't allowed to at Sarah's request but we did get some pictures which I will post bellow.
When it came to answering questions I actually got one of mine answered, well it was Angelina's question, and it was kind of awkward how they came to notice my hand being up. They could answer about five questions and I had put my hand up each time but they were mostly answering from the other side of the room. When they said that they could only answer one more question of course my hand was still up but then I felt someone behind me raise my hand hire and point to me. They called over to the moderator "Here take this girls question, she's had her hand up the whole time." for everyone to hear. I can't even describe how much I was blushing and I just wanted to hide behind Angelina. They took my question, of course, it would be kind of awkward if they didn't. It asked if Celeana and Nox (if you don't remember him he was a thief in the first book) would ever get together at some point- they are Angelina's ship. Sarah said that it would never happen and if you wanted to get on that ship you should wait at the docks, sorry to any Celeana/Nox shippers out there but you're on the Titanic that never sailed.
We of course, also got our books signed. The line almost made a full loop around the bookstore, it was absolutely crazy and to make it worse it didn't move. I ended up leaving the book store with Angelina in line to go get us some snacks because we would be there for a long time. I don't know how long we were in line but it felt like forever. As soon as we got our books signed we left, it was 10:00pm and we both had an 11:00pm curfew. We didn't quite make it home on time....
So in summary, we met Sarah J. Maas, it took forever, it was extremely awkward, and I was hungry the whole time.... it was awesome. 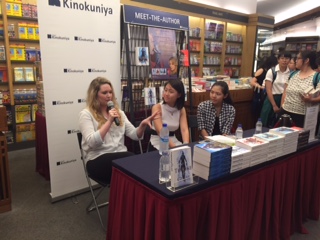 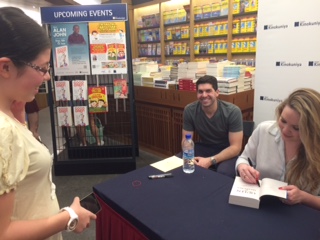 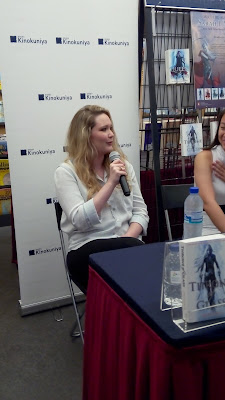