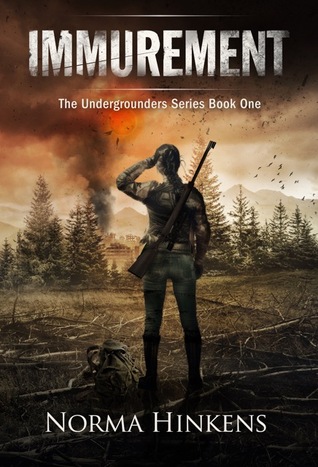 Book Blurb (from Goodreads):
The earth’s core overheats. The sovereign leader vanishes. A young girl is the survivors’ only hope …

What little land is habitable is patrolled by cutthroat gangs of escaped subversives, but that’s not the greatest threat facing sixteen-year-old Derry Connelly, her brother Owen, and a ragged band of Preppers holed up in a bunker in the Sawtooth Mountains. Mysterious hoverships operated by clones are targeting adolescents for extraction.

Owen, is one of the first to disappear. To save him, Derry must strike a deal with the murderous subversives, and risk a daring raid to infiltrate the heart of the extraction operation.

But will the rookie leader falter when forced to choose between her brother and a clone who ignites something inside her she didn’t know was possible?

This has definitely been an interesting book to read. I have read several dystopian and apocalyptic books; however, despite some concepts being repetitive, I didn't get bored reading this book.
Basically, Earth is overheating and natural disasters wipe almost the entire population off the face of the earth. There were some survivors and they set up an underground community and called themselves... you guessed it, Undergrounders.
There are several points I would like to address about this book.
First, the general plot line. I liked how everything was set up at the beginning. The reader was gently introduced to the characters and the catastrophic world they are currently living in. The reader also gets to know the characters more as they progress in the story. Therefore the world-building was definitely well done. It wasn't rushed in any way and all the information was conveyed in a way that made it really easy to remember. There wasn't any information dump throughout the entire book. However, there are more points to make regarding the plot line. A plot line needs to have conflicts along the way; otherwise the book would be rather dull to read. But still I thought that absolutely nothing worked according to the characters' plan. There was always a last minute twist that throws everything off. At first I thought that this was weirdly coincidental, but then I got used to it.
The characters are another important point to make. Derry is the main character of the story. She was an insecure girl at the start of book and relied on other people to do the job for her. However, she has a strong bond with her brother Owen and really cares about her friends. When the story progresses, the reader realizes just how much she has really developed. She is very selfless and would do anything to save an innocent person. Most of the characters were special in their own way and had their unique personality. However, I didn't really feel invested in them, I didn't root for the characters as much as I should, probably because I didn't really care that much about them. The special bond between the reader and the characters was missing for me. Still, I thought that Mason was a very interesting character. He was very mysterious and I really don't know  a lot about him. But I could see that there was a lot more to him than was let on.
I always talk about the writing style when reviewing a book because it is an important factor for me. I found that the book was written in a conversational way. Therefore it always interested the reader and I found that I could pick up the book at any point and continue reading as if nothing happened. I got sucked into the story, although it never really seemed to get that much of a grip on me.
Overall, I give this book 3 out of 5 stars!