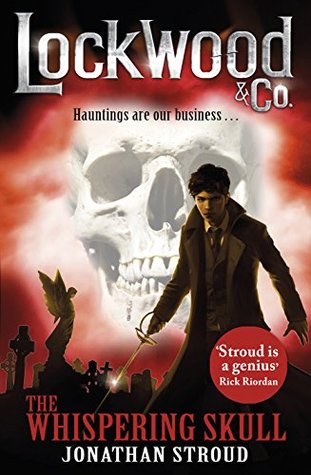 Book Blurb (from Goodreads):
In the six months since Anthony, Lucy, and George survived a night in the most haunted house in England, Lockwood & Co. hasn't made much progress. Quill Kipps and his team of Fittes agents keep swooping in on Lockwood's investigations. Finally, in a fit of anger, Anthony challenges his rival to a contest: the next time the two agencies compete on a job, the losing side will have to admit defeat in the Times newspaper. Things look up when a new client, Mr. Saunders, hires Lockwood & Co. to be present at the excavation of Edmund Bickerstaff, a Victorian doctor who reportedly tried to communicate with the dead. Saunders needs the coffin sealed with silver to prevent any supernatural trouble. All goes well—until George's curiosity attracts a horrible phantom. Back home at Portland Row, Lockwood accuses George of making too many careless mistakes. Lucy is distracted by urgent whispers coming from the skull in the ghost jar. Then the team is summoned to DEPRAC headquarters. Kipps is there too, much to Lockwood's annoyance. Bickerstaff's coffin was raided and a strange glass object buried with the corpse has vanished. Inspector Barnes believes the relic to be highly dangerous, and he wants it found.

My Review
I can't stop fangirling about the awesomeness of this book! It is fantastic! I need the next book now! OK, I need to calm down to write a proper review. Here we go!
This is the second installment in the Lockwood & Co series. It continues roughly a year after the last book. Lockwood's agency has been doing well since then and even gotten in the newspaper several times as the Agency of the Month. However, Quill Kipps' team from the Fittes agency keep on sweeping in and stealing their hauntings. Therefore George challenged them, that if they have another combined case, the loser would have to write a newspaper article admitting defeat and that the winning agency is superior to them. Then they get an immediate combined case when a dangerous relic is stolen from a coffin...
This book just blew my mind, it was absolutely amazing! I loved it so much, it was as good as the first one. Everything about this book was pure awesomeness. The deadpan humour, the plot and how everything worked out was done so cleverly. The characters were also as awesome as ever. However, I found that the plot was kind of a repetition from the first book (if you read this book you will know what I mean). I didn't really care either way because it was just as exciting to read.
I loved all the characters. I still thought that Lockwood and Lucy were meant to be but they didn't get together! There were so many hints throughout the entire book that they are meant to be! George was as hilarious and sarcastic as ever which I really liked. For some reason I can't explain, I thought that the skull and Quill Kipps became my new favourite characters. I liked the skull because of its commentary and Kipps... I don't know.
Overall, this book was absolutely epic and I recommend everyone to read this series just to say that they have. I found that the plot was a bit repeated from the first book, but The Whispering Skull certainly didn't lack any action and the pacing of the plot was also really well done.
I give this book 5 out of 5 stars!