Jake and Lily by Jerry Spinelli 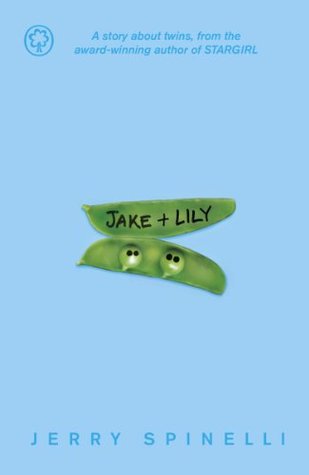 Jake and Lily are twins. Even though they seem pretty different—Jake is the calm one and Lily has a temper; Lily is obsessed with trains and Jake collects cool rocks—they feel exactly the same, almost like two halves of one person. Whenone of them gets hurt, the other can feel it. They can communicate without words. And mysteriously, every year on their birthday, they sleepwalk to a train station in the middle of the night.But the year they turn eleven, everything changes. Their parents announce it’s time for separate bedrooms, and Jake starts hanging out with a pack of boys on the block. Lily is devastated—not to mention really, really mad. And as she struggles to make friends and get a life apart from her twin, Jake finds himself dealing with a neighborhood bully and has to decide what kind of person he reallyis.Beloved author Jerry Spinelli has written another perfectly on-target, humorous, and brilliant story about the struggles of growing up and discovering who you are.

My Review:
I have never read a book that involved twins before which made this an extra interesting book. Although that is not the reason that I read this book, I noticed straight away that Jerry Spinelli also wrote Stargirl which was the book we had to read in 6th grade. I did not enjoy Stargirl, so I was interested in what else he could do. I was pleasantly surprised how much I enjoyed it.
The plot of this book defiantly plays around with the theory of twins having some kind of extraordinary why of communicating. I would love to have a twin if that was how it works. Jake and Lily is a book about finding out how you really are and when it is time to stray from the familiar. I have not came across many books- or should I say good books- that use this plot line. There were moments where you can defiantly relate to strongly. The fact the Jake and Lily stray from each other and then find each other again along with finding themselves was really touching.
The characters in this book where easy to relate too. Lily was the easiest to relate to for me. She was funny, made friends without even knowing she was doing it and always said what was on her mind. She didn't care what other people thought of her. She was always just herself. Jake always seemed to find himself in the middle of two people. It was interesting to see how he dealt with it and learned from his mistakes. It created so much character development for the both of them. Poppy (the uncle) was the person that Lily could count on for good (but not always useful) advice. The thing that I liked most about Poppy's character is that his advice does apply to all of us. One day we might wake up to see that the world is one day ahead of us, we shouldn't worry. You should got help, maybe get mad, you need to turn to someone, because at the end of the day it is not about life finding you its you finding it. You need to put your trust in the fact that eventually everything is going to be okay and even if you turn your back on something or someone it doesn't mean that they or it has gone away.
In my opinion EVERY teenager needs to read this book.
I give it 5 out of 5 stars:

Posted by Elephants and Meerkats at 04:38