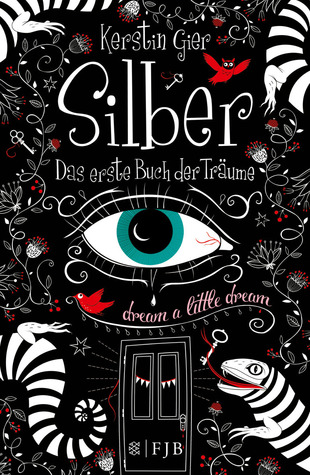 Book Blurb (from Goodreads):
Mysterious doors with lizard-head knobs. Talking stone statues. A crazy girl with a hatchet. Yes, Liv's dreams have been pretty weird lately. Especially the one where she's in a graveyard at night, watching four boys conduct dark magic rituals.

The strangest part is that Liv recognizes the boys in her dream. They're classmates from her new school in London, the school where she's starting over because her mom has moved them to a new country (again). But what's really scaring Liv is that the dream boys seem to know things about her in real life, things they couldn't possibly know--unless they actually are in her dreams? Luckily, Liv never could resist a good mystery, and all four of those boys are pretty cute....

My Review
I have read the Precious Stone trilogy before this book. At first I wasn't sure if I should read it or not, but then I decided to because I loved the author's writing style.
At first glance, the story might not seem serious; after all, it is mostly about dreams. But boy, does it get dark after a while. The plot was intriguing once the story actually kicked up. However, the plot did drag at places when the time is just passing and nothing exciting is really happening.
I also found the whole concept itself really interesting: that dreams can be real to some degree and everything about the demons. The feeling of a mystery unsolved at the end of the book made me want to continue the story and grab the next book in the series.
Firstly, I absolutely ship Henry and Liv. They are meant for each other. Henry is really nice (when he wants to be) and Liv is just awesome. We actually get to see her do some awesome kung-fu moves. She is funny and charismatic. I found that her mom was kind of ridiculous at times, but I can see that she does care for her daughters.
I loved Liv's narrative voice. She made everything entertaining and humorous to read. I also found the Tittle Tattle blog an interesting concept. It adds extra mystery to the story and kind of sums everything up using a non-fantasy reason. It is also really fun to read about gossip that takes place in the book, but isn't really part of the plot. (Just for extra info: the blog is an actual website, I searched it up)
All in all, I absolutely loved the writing style of this book. It was quite funny and humorous to read. The characters were very interesting and I felt like I could connect to some of them. I can't wait to read the next book after that ending.
give this book 4 out of 5 stars!