A Confusion of Princes by Garth Nix 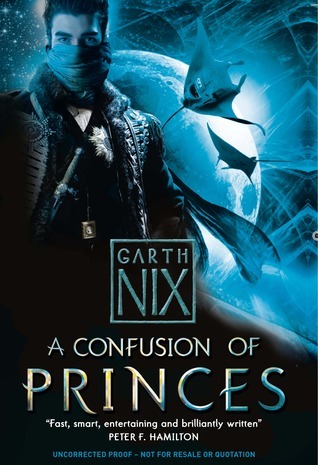 Book Blurb (from Goodreads):
I have died three times, and three times been reborn, though I am not yet twenty in the old earth years by which it is still the fashion to measure time. This is the story of my three deaths, and my life between. My name is Khemri.

Taken from his parents as a child and equipped with biological and technological improvements, Khemri is now an enhanced human being, trained and prepared for the glory of becoming a Prince of the Empire. Not to mention the ultimate glory: should he die, and be deemed worthy, he will be reborn...Which is just as well, because no sooner has Prince Khemri graduated to full Princehood than he learns the terrible truth behind the Empire: there are ten million princes, and all of them want each other dead.

My Review
Honestly, I was kind of disappointed by this book.
I think my expectations were too high. So far I loved every single book Garth Nix wrote, especially with that wry sense of humour. However, I didn't really like this book that much.
This is a sci-fi book. Prince Khemri was taken as a baby from his parents and grew up to be Prince. We follow Khemri on his life journey growing up and making decisions that would change his lives.
The first chapter tells us right of the bat, that Prince Khemri died three times and that this book is about his life. This interested me from the start and the first paragraph was very intriguing. Then it went downhill from thereon out. The first couple of chapters, in fact the entire first half of the book was a continuous information dump. I was bored out of my mind and put the book down for quite a while until I decided to finish it. I guess, that I am glad after all that I finished it, because it became really good. The world building was really slow and boring though, but the second half of the book was way better and also exciting to read.
Khemri underwent some serious character development in this book, which I guess was the point. He was spoiled at first and also very, very arrogant. He believed that he was the best of the best and treated everyone else like dirt. However, I really liked Haddad and Raine. Haddad was responsible and you could really see how much he cared for Khemri near the end of the book. Raine was a really refreshing character, especially after reading about how arrogant and spoiled Khemri and the other Princes are.
Overall, Garth Nix finally retained his amazing writing style in the second half of the book. It took the first half of the book to create a very complex world, which I think should have been done more gradually and not dropped like a bombshell.
I was slightly disappointed by this book. I give it 3 out of 5 stars.