Mister Monday (The Keys to the Kingdom #1) by Garth Nix 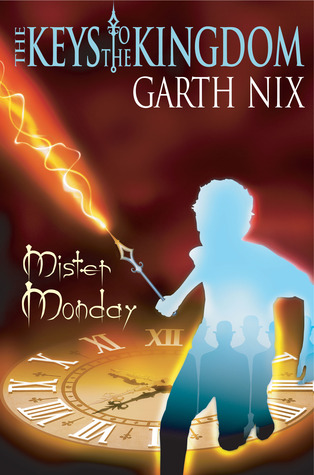 Book Blurb (from Goodreads):
Aurthur is supposed to die an early death, but he is saved by a key shaped like the minute hand of a clock. A stranger named Mister Monday will stop at nothing to get the key back, and Arthur must unravel the secrets of the key and discover his true fate.


My Review
This was an amazing first book.
I originally picked up this book because it is written by Garth Nix and I already read the Old Kingdom Series by him and I absolutely loved it. I totally expected this book to be as good, especially after reading the back.
This story is about an asthmatic boy called Arthur Penhaligon who was given a key in the shape of a minute hand. But now his world is being plagued by the disease brought by the dog-faced Fetchers called the Sleepy Plague. Now he has to save his world by going into the House and defeat Mister Monday to find the cure.
Now, I found that I was pretty confused because this book is high-fantasy and has a lot of its own terms. I will therefor give you a brief back-story and explanation of the House. Basically, the House is the epicentre of the universe and is build upon Nothing by the Great Architect. The Architect created everything, all the other worlds as well as Earth. These mortal worlds are called the Secondary Realms. When the Architect left the House, She left the Will there to look after the workings of the House and stick to the Original Law. One of the rules was to not interfere with the Secondary Realms. There were Trustees in charge of different parts of the House and they broke the Original Law by interfering. The Trustees broke the Will into seven parts and hid the parts. This story follows the first part of the Will escaping. And you guessed it (or didn't, this isn't a spoiler): Mister Monday is one of the Trustees.
I really loved the plot of this book.I love fantasy books in general and this book is extreme high-fantasy, even for me. But I loved it. Everything was well-thought out and the solutions to sticky situations were rational and didn't just appear out of thin air. The book was full of action and you literally never got bored reading it. I found that, since there was a lot of world-building required to make the story good, there was a lot of confusion and more explanations were needed at the beginning. But gradually everything got explained, but there were still some terms in the book which I didn't understand until after I finished the book and thought about it.
Arthur was the kind of character who you like even though you don't know him. He is likable and, considering the circumstances, very brave and selfless. Suzy was a very interesting character and nearly made it to my favourite character for this book. Suzy is very adventurous and says anything that's on her mind, sometimes causing trouble (a lot of times). But she is still very friendly and does manage to help Arthur a lot. She never thinks things through and just does them while Arthur always considers everything. My favourite character might be a strange choice, but I settled for Monday's Noon. If you noticed who my other favourite characters were for other books, you would notice that a lot of them are sometimes evil. I don't know why I like the evil characters! Something about Noon's personality somehow just made me like him.
The writing style was very good. I did not get bored reading this book and I could relate to the feelings of the characters. Garth Nix also manages to write with a sense of humour. It isn't outright laughter, but if you look closely, you will definitely feel a sense of amusement at some parts.
Despite the confusion at the beginning due to all the world-building required, I thoroughly enjoyed reading this book. I don't recommend it to people who don't really like fantasy, because this book is high-fantasy (and that is saying something coming from me). I really love fantasy though and this story was very good so I am giving it 4 out of 5 stars!