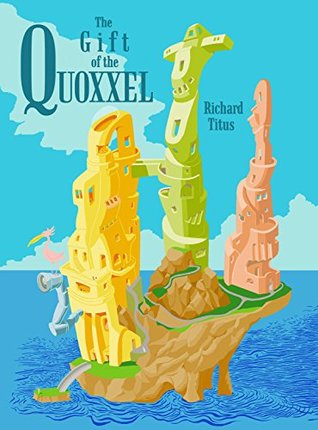 Book Blurb (from Goodreads):
King Norr of Nibb was not content. He longed to know of the world beyond his tiny, island kingdom. Why travel elsewhere, said his people. What place could possibly be more perfect than Nibb?

What frustrated Norr even more, outsiders never came to Nibb. Foreign ships approached, hesitated, then sailed away. Why was that?

And that wasn't the only mystery.

Who was the little girl who sang, but would not speak?

What kind of monster lurked in waters along the shore?

And most importantly, what’s for lunch?

Drearily perfect Nibb was about to turn upside down. As King Norr often said, it's enough to give one "haddocks."

A lot of effort was put into making this book.
When I first saw this book, I kind of guessed already that it would be a humorous read - and I was not disappointed. There were definetly a lot of jokes in The Gift of Quoxxel, even the glossary had a sense of humour in it. It weren't the kind of jokes that would make you laugh out loud, but it was very amusing to read. The characters also had a great variety of different personalities. King Norr for example isn't the brightest, he believes everything that he is being told and sometimes I believe that he is terrified of his own surroundings. But then, he manages to be so gullible and stupid, that he crosses the line and it is actually funny. Queen Vayla on the other hand though, actually knows when she is being fooled, she is considerate and she is way more intelligent than her husband.
I found that in a lot of parts while reading this book, I was surprised at the turn of events. The plot has a lot of twists and turns, so many, that I got really confused. The beginning especially needed some more explanations and a bit more connection between the consecutive events. I think that maybe some of the confusion might have been intentional. Later on though, the story became more substantial and you could actually feel attached to the story.
I would like to comment on the effort and work that went into this book. First, as the island is called Nibb, Richard Titus created a Nibbian culture. He invented words and found interesting meanings for each of them. Because it is an ebook, there are links attached to each word, which are in the glossary. The pictures are also hand-drawn and they look cute, in some kind of way. Also, I was really impressed, that the author composed two songs for the book. At the back of the book, piano sheets are also included and you can listen to how the songs would sound when you click on a link beside the songs. I am really interested in trying out these songs on my piano! I just have to give extra points for that!
I enjoyed reading The Gift of Quoxxel despite the confusion and give it 4 out of 5 stars!