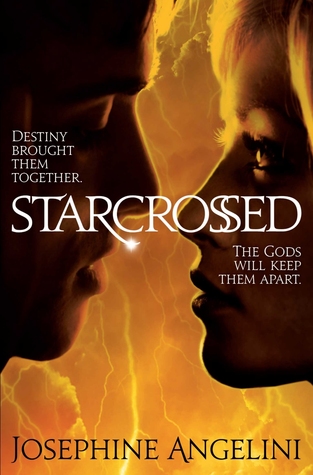 Book Blurb (from Goodreads):
Destiny brought them together.
The gods will keep them apart.

When shy, awkward Helen Hamilton meets Lucas Delos for the first time, she thinks two things: the first, that he is the most ridiculously beautiful boy she has seen in her life; the second, that she wants to kill him with her bare hands.
An ancient curse means Lucas and Helen are destined to loathe one another. But sometimes love is stronger than hate, and not even the gods themselves can prevent what will happen next...

My Review
OK, I admit it, I have a thing for Greek mythology (if you haven't guessed yet from all those Percy Jackson books). So, of course, when I saw this book, I thought that it would be very interesting for me to read another Greek mythology book. I was excited and happy to start reading it. If it weren't for my book rule to always finish a book, I would have stopped reading Starcrossed before the action.
Why? Well, I had several reasons... First, there was an awful lot of world building to be done, and there wasn't any action until almost 100 pages in. A lot of information was also poured into the story, so I was really confused during some parts of the book. I also found the writing style a bit childish, as if the teens like Claire tried to talk in the hippy teen language.
Otherwise, once the action came and things actually happened in this book, I enjoyed reading it. The action kind of made up for the beginning of the book. There was a lot of fighting near the middle and the end of the book. There was also a giant "Oh no!" moment three quarters of the book in. A lot of questions get answered near the end of the book.
The characters didn't have a lot of personality traits in the beginning, but then you can slowly see the different personalities. I also noticed, that everybody either hates Helen or loves her and lets her off the hook way too easily. Sometimes though, Helen is so thickheaded, that I wanted to scream at her in frustration for not understanding something. Claire and Hector were probably my favourite characters, Claire was kind of sassy and Hector was just a really nice guy beneath all of the tough guy act.
I thought that the romance between Lucas and Helen was a bit cheesy and a bit too "instant-love" for my taste.
Besides that, the book was good, there was something that kept me wanting to read more. I enjoyed it and look forward to the next book. I give it 3 out of 5 stars.