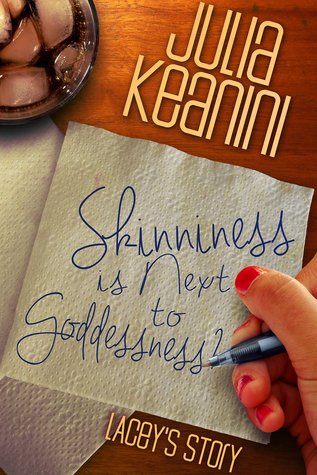 Book Blurb (from Goodreads):
Hate is a powerful word, especially when you’re using it against your own reflection.
In fourteen-year-old Lacey Steele’s world, being “skinny” equals no more caustic remarks comparing her to Shamu the Whale, meriting the attention of her ten-year crush aka the beautiful quarterback next door, and finally deserving her distant mother’s love- pretty much goddess status. But diets, nor health food, nor exercise bring Lacey desired results and her future looks everlastingly chubby.
Unexpectedly, Lacey and her friend Ashley stumble on an easier method. Extreme calorie cutting may seem a little drastic, but of course it’s better than … an eating disorder. Unfortunately, the easy route has a price neither girl planned to pay, but it comes due anyway, for one of them.
A story of hope and eventual acceptance, Skinniness is Next to Goddessness?Lacey’s Story, takes a brighter approach to an age old tale.
Book One in the Skinniness is Next to Goddessness? Series.

An enjoyable and refreshing read.
This book is about a girl called Lacey, who has been bullied by kids in school and by her mean mom because she is fat. Her parents have divorced and Lacey now lives with her mom. When she wanted to marry again, Lacey is sent off to live with her father and back to her normal home which she left for 4 years. There she starts a club, Future Goddess Girls, with a friend named Ashley. They want to lose weight as fast and efficiently as possible.
The focus of this book is about eating disorders. It is a very serious topic and Julia Keanini has done a great job in writing about it seriously, while still creating an enjoyable story. I liked reading Lacey's Story, it was interesting and there were more turns to the plot (or not really the plot, more like the story itself) than one might suspect. The plot isn't deep, but it was refreshingly simple and there weren't any hidden plot twists or anything. Lately I've been reading pretty intense books, this was a nice and different change.
I felt that the characters were kind of stereotypical. The girls were all crazy about their looks and weight and then there were also the socially perfect girls, that rule the school because they are beautiful.  Even though I know that people like these exist in almost every school, I still think that the mean bullies like Jamie were a bit too typical. I still liked certain characters though. As an example, I really liked Gina. Her family might have been a bit too good to be true but her lovable personality was really good. She accepted Lacey for what she is and was nice and hospitable to all of Lacey's other friends as well. Ashley was an interesting character. She was what we could describe as a girly girl and wasn't that interesting to read about, but the more the story progressed, the more I got used to her personality.
Julia Keanini wrote in a way, that kept the reader reading. Getting to read out of Lacey's perspective made the story more personal and the reader had a greater chance of relating to the characters. It was written simply and not in a poetic kind of way.
Overall, I enjoyed reading a different book for a change and just found, that the characters were too stereotypical. Otherwise, it is easy to read and I give it 4 out of 5 stars!