The Mark of Athena (Heroes of Olympus #3) by Rick Riordan 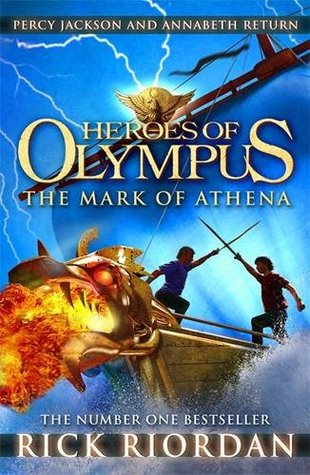 A QUEST TO FIND - AND CLOSE - THE DOORS OF DEATH.

Annabeth felt as if someone had draped a cold washcloth across her neck. She heard that whispering laughter again, as if the presence had followed her from the ship.

She looked up at the Argo II. Its massive bronze hull glittered in the sunlight.Part of her wanted to kidnap Percy right now, get on board and get out of here while they still could.

She couldn't shake the feeling that something was about to go terribly wrong. She couldn't risk losing Percy again.

My Review
What do you expect from a book that is written by Rick Riordan? That it is freaking awesome! The writing style, the plot, the characters and everything combined is just amazing! Okay, general plot of the book:
It is basically about Athena's ego getting insulted by Romans. Because of that she is now mentally confused and insults her daughter, Annabeth, in return. Athena then sends Annabeth on a quest that no one has ever survived and says that Annabeth has already failed and isn't her daughter. How nice... The good part for Annabeth is that she gets reunited with Percy! And her first thought is: Seaweed Brain. Now, finally, all the seven demigods are gathered...
This book is now also told out of Annabeth's perspective, enabling us to understand her personality and hear her thoughts. The story is also told by Percy (of course), Leo and Piper. While reading this book I also realized that I didn't like Frank that much, probably because he was very timid and (for me at least) not interesting.
I will always keep talking about the writing style, because every time I read a book by Rick Riordan it hits me again and again how hilarious it is. In the book, when the characters are in great danger, they just mention things so obvious or make observations that it are really funny and once you think about them you think "That's so true!"
And then last but not least, that cliffhanger at the end. When I read the last page I was like: "NOOOOOO, there must be more!! Need the next book!!"
This book was really amazing and I give it 5 out of 5 stars!