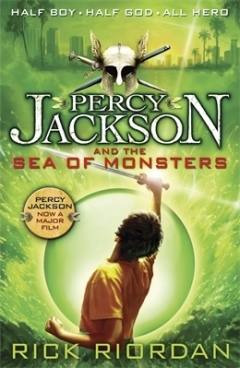 book blurb (from Goodreads)
YOU CAN'T TELL BY LOOKING AT ME THAT MY DAD IS POSEIDON, GOD OF THE SEA.It's not easy being a half-blood these days. Even a simple game of dodgeball becomes a death match against an ugly gang of cannibal giants - and that was only the beginning.Now Camp Half-Blood is under attack and, unless I can get my hands of the Golden Fleece, the whole camp will be invaded by monsters. Big ones...

My review:
I did not enjoy this book as much as the first book to be honest but it was still good, because like everyone says: It's Percy Jackson!
The plot in this book was equally as interesting and intriguing as the first book, but in my opinion, not as well carried out. I enjoyed the sense of rebellion that went was there throughout the book, like, You told me not to do it, so I am going to do it anyway...  The ending really sped by and it was a challenge to put down, however the beginning was a bit slow (even though we did get a good brief fight seen). There is a large difference between the sizes of the two books, (The first is thicker then the second). Whilst I do not mind this I still found the second book a little too short. I would of liked some explaining chapters to make it a bit longer, but that might just be me being a bit greedy since I don't have the third book yet and I want more.
The characters were still awesome. Percy was still funny and had a sharp tongue however I found that I didn't have as many laugh out loud moments as the first book, but that might just be my strange sense of humor. I liked Annabeth a lot more in this book. I found that she was more easygoing and not a tense around Percy so we got some good conversations out of them. We did not see so much of Grover in this book which was a little bit disappointing, however when we did see him it was good funny action scenes at the end so I am not complaining (that much). Tyson was a nice new edition to the characters in this book, whilst he didn't have any appealing characteristics (well to me) I found that he was good for Percy and I liked having him around.
I give this book 3 out of 5 stars:

Posted by Elephants and Meerkats at 01:03