The Oracle (The Oracle Prophecies #1) by Catherine Fisher Review 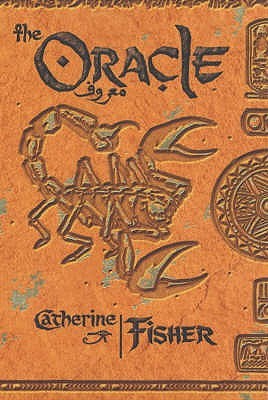 Book Blurb (from Goodreads):
After wowing kids and critics alike in the UK, this smart and suprisingly gritty historical fantasy from award-winning Welsh author and poet Catherine Fisher finally arrives in the US. Fisher grabs readers quickly with a convincingly imagined Greco-Egyptian setting and characters that defy quick classification. Our heroine, Mirany, begins the story as a timid teen serving the High Priestess, the masked Speaker who discerns the wishes of a god through a mysterious island oracle. When the current Archon (the sequestered God-on-Earth) passes a secret note to Mirany just before he's sacrificed, the story throws intrigue onto intrigue with a murder plot, a drunken musician, a conflicted scribe, a slick tomb robber, an offended Rain Goddess, and no shortage of mystic burial rituals and dusty tombs.

My Review
I thought that this book was pretty interesting. When I first picked up this book, I expected it to be about real Egyptians gods and because I like myths I thought that I wanted to read this book.  But it turns out that the god didn't have a name and there was only one god. Otherwise I liked the plot. Everything was explained gradually and the idea was really good. I never really liked Chryse because her personality was always really annoying even though she was nice to Mirany. I think that this is really weird, but my favourite character happens to be the Jackal because he is so composed, witty and he was a tomb-thieve. That is hard core.
I liked everything about this book, besides the fact that I got confused sometimes because I didn't realize that something happened or how it happened. I don't know, maybe it is just me.
But overall, I give this book 4 out of 5 stars!