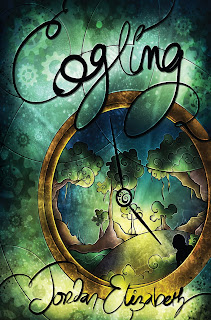 COGLING
Young Adult Steampunk-Fantasy
The beautiful cover is thanks to Mandie Manzano.


When fifteen-year-old Edna Mather tears an expensive and unfamiliar pocket watch off her little brother's neck, he crumbles into a pile of cogs right before her eyes. Horrified, Edna flees for help, but encounters Ike, a thief who attempts to steal the watch before he realizes what it is: a device to power Coglings—clockwork changelings left in place of stolen children who have been forced to work in factories.

Desperate to rescue her brother, Edna sets off across the kingdom to the hags' swamp, with Ike in tow. There, they learn Coglings are also replacing nobility so the hags can stage a rebellion and rule over humanity. Edna and Ike must stop the revolt, but the populace believes hags are helpful godmothers and healers. No one wants to believe a lowly servant and a thief, especially when Ike has secrets that label them both as traitors.

Together, Edna and Ike must make the kingdom trust them or stop the hags themselves, even if Ike is forced to embrace his dark heritage and Edna must surrender her family. 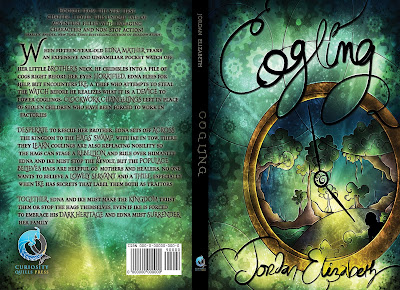 ###
Excerpt:
Green smoke snaked up the side of the tenement and drifted over the sill of an open window. A breeze blew the vapor into a column before it solidified into the shape of a stout, young hag. She shook her crimson curls away from her face and straightened the hood of her cloak to keep her kohl-lined, silver eyes shadowed.
The scent of lavender clung to her robes, washing over the small room. Two brass-framed beds crowded the floor. Blankets covered sleeping children. A little boy wheezed against the head of his stuffed bear, drool dripping onto the wool.
The hag squinted to see the goldenrod dream cloud above his head—a dream about seeing his father again. She frowned at the other bed, where a sleeping teenager lay with a threadbare blanket tugged around her chin. Even squinting, the hag couldn’t make out a dream cloud. The girl was too old to be of any use.
The hag slithered to the boy’s bed and, from the folds of her cloak, drew out a rectangular box four inches long, with a circular indentation on one side. She set it on the floor to remove a vial and rag from her skirt pocket, the rough wool of the rag irritating her fingertips.
“Do it, Simone,” the hag muttered to herself as she willed her hands not to tremble. “Make the Dark Mother happy.” She couldn’t fail at her first mission.
Holding her breath, Simone dribbled three drops onto the rag, yanked the teddy bear away, and shoved the drugged cloth against the boy’s mouth. His eyes opened, his gasp muffled, and his body jerked. Simone stiffened.
The girl moaned. Her mattress rustled as she rolled over to face the wall, brown curls shifting over her pillow.
Simone’s heart thudded. By the seven Saints, she should’ve cast a sleeping spell over the girl. The Dark Mother preferred humans to think hags were harmless healers, not thieves who kidnapped children.
The boy writhed, squeaks emerging from behind the rag. Simone pressed harder. She needed his breath in the wool to disguise and fuel the machine.
The potion took hold and the boy collapsed. Simone’s thick lips curved over her broken teeth. She lifted a pocket watch from around her neck and positioned it into the crevice in the metal box. As the two pieces connected, a chime rang out. She set the box beside the limp little boy and draped the rag over it. Even though she should wait to make sure his breath stuck in the machine, she couldn’t risk waking the girl.
The metal stretched to become his replica as if it were made of putty. With a second chime, the metal shimmered and dulled into the pale peach of his flesh, becoming an exact duplicate of the child.
“Mine.” Simone hefted the little boy into her arms, leaving the duplication on the bed, and transformed to smoke before the chimes awoke the girl.
###

Check out COGLING on Goodreads and Amazon.

Angelina's Review:
This book definitely didn't disappoint.
I was really excited to start reading this book for multiple reasons. First, the book cover is gorgeous, it looks amazing with the different colour hues. The book blurb also intrigued me and when there is magic in a book, I am almost definitely going to read it.
Cogling follows the adventures of a fifteen year old girl called  Edna Mather. She lives in a poor family along with her brother Harrison. When she wakes up the next day, everything seems normal except for Harrison's suddenly peculiar behaviour. Soon Edna finds out that  this Harrison is a cogling and that her real brother has been kidnapped by hags. So she sets out on a journey to save her brother before it's too late.
This book had a very interesting concept. It is almost like the changeling children in some myths, just that this book also has a steampunk theme. I found that the story line was a bit slow at the beginning and that some parts of the plot took up too much time; however, most of the book had very enjoyable fast-paced action which I personally really like.
Sometimes I felt like Edna was very, very stubborn at times, which also dragged the plot in the book at the beginning for quite a long time. She just stuck to her beliefs so strongly, that everything seemed to drag for a bit. I also found it kind of odd how she was too superstitious because she always seems to play to the Seven Saints and she keeps on believing that there is something evil inside of her.
I thought that he evil also needed more explanation. It is only cleared up close to the end but still I wanted to know more information. Most  of the time I also thought that Edna's deep hatred for the hags was quite irrational. Although I did like the concept of Edna having a mysterious secret in her.
I also appreciated the immense character development all of the characters went through. You could gradually see how Edna learned more about the world and accepted who she was. Ike was also a good character and we can see how he also became more trusting.
The writing was also pleasant to read. There was something about it that makes it very interesting to read. Having read several books from this author already,  I have an idea what her writing style is like but I thought that this book is definitely one of her best pieces of work.
I give this book 4 out of 5 stars!

Jessica's Review:
Cogling took me a while to get to. I blame my epic procrastination skills which are kind of getting out of hand. But I've read it now so all is good with the world.
The book begins with a girl called Edna and her little brother going to work one day. It was here that Edna realised that her brother, Harrison, wasn't quite acting like himself. A couple more chapters in, when Harrison falls apart in front of her very eyes and all that was left was some cogs and bolts, we discover that her 'brother' is a cogling thanks to the knowledge of Ike, a thief. Her real brother has been stolen by the Hags in the night to work in a factory. Determined to save her brother she takes all of the money that she can get her hands on and sets of with Ike to save her brother. The book started off with a more or less fairly basic concept but it developed into so much more than that. The characters that were introduced really drove the story along and the amount of thought that went into some of the details in this book was incredible. It was at the point that when one of the larger plot twists occurred, I was able to look back and spot all of the little hints that went towards it. Too small to put too much thought into, but they were there. It was things like this that made the plot so rich and interesting.
Edna is very dedicated to her family, to the point where she would have probably sacrificed herself if it meant that her brother could go free. She has in her, what she refers to, as the evil. She always says that she can’t let it out and that horrible things will happen if she does. However, my point is that if she had even used it once, it would have made the journey 100Xs easier. I wish that she could have been brave enough to use it more than that one measly time at the end and I'm not even sure if that counts.
There is only one thing that really annoyed me with this book and I'm sad to say that that was the dialog of some of the characters. Unfortunately some of it was so cheesy that I had to put the book down and roll my eyes. It really made some scenes stick out like sore thumbs.
However, despite its faults, I still enjoyed this book a lot. I give it 4 out of 5 stars.

About the Author
Jordan Elizabeth, formally Jordan Elizabeth Mierek, writes down her nightmares in order to live her dreams. She is the author of ESCAPE FROM WITCHWOOD HOLLOW, TREASURE DARKLY, and BORN OF TREASURE. Check out her website, JordanElizabethMierek.com, for more information on her books, contests, and bonus short stories.
###
a Rafflecopter giveaway

Posted by Elephants and Meerkats at 05:18